Patriarchate of Pec, Church of Saint Demetrius Prizren We attended the Divine Liturgy this morning in the Cathedral of Saint George. Prizren was once the medieval capital of Serbia. Before 1999, more than 20,000 Serbs lived in Prizren. Today, only 20 live here, and almost all of them were at Liturgy this morning. The Cathedral was built for the Orthodox population in the 1860s, but today, the large church is mostly empty because of Albanian pogroms to force Orthdox Christian Serbs out of their homeland.  The  utilities in Prizren are really wild! The small Church Saint Andrew, across the street from the cathedral, contains some medieval frescoes in poor condition. Theotokos of Ljevisha The old cross-in-square basilica church of the Theotokos of Ljevisha in Prizren was frescoed by Michael Astrapas in the 14th century.  Note the master's unique composition to accomodate the architecture. One famous fresco from the 12th century remains, the treasure of the church. This is the icon o
Post a Comment
Read more 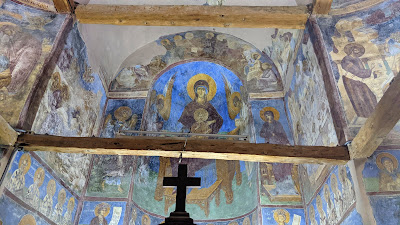