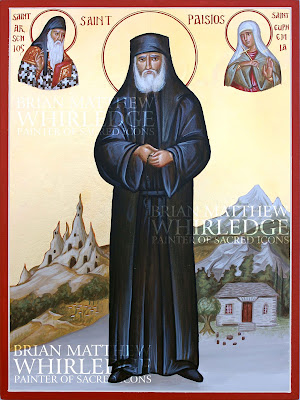 Saint Paisios of Mount Athos, with Saint Arsenios of Cappadocia and Saint Euphemia the Great Martyr.
Acrylic and gold on birch panel. 9x12"

Saint Paisios, a most wonderful saint of our own times (1924-1994). He was born in Cappadocia, Asia Minor (the landscape on the left), in 1924, was baptized by Saint Arsenios (+1924, in the upper left of the icon). His family moved to Greece immediately after his baptism, during the "population exchange," the genocide exterminating Christians committed by Turkey. In Greece, he grew up strong in the Christian faith, and following the prophecy of St. Arsenios, he became a monk on Mount Athos. The mountain on the right is the Holy Mountain Athos, and below is his cell. He became well-known for his spiritual council and holy life. St. Euphemia (+303, in the upper right), appeared to him several times, directing him. Failing health caused him to move to the Sacred Monastery of St. John in Souroti, just outside Thessaloniki. Here, he gave spiritual guidance to many, and reposed on July 12, 1994. He was glorified as a saint in 2015.