The Seven Holy Sleepers of Ephesus. 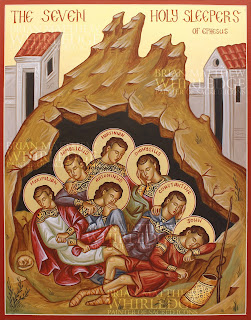 The Seven Holy Sleepers of Ephesus. Acrylic and gold on panel. 11x14"

Today we remember the Seven Holy Sleepers of Ephesus. These seven Christian youths were of noble lineage and were persecuted during the reign of Decius (around AD 250). Preparing for martyrdom, they were praying in a cave outside Ephesus, when soldiers sealed the cave to kill them. They entered a deep sleep for two centuries. Around the year AD 450, a shepherd opened the cave, and the youths emerged. At this time, the Ephesians doubted the general Resurrection, and the youths confirmed the Resurrection by their 200-year sleep. This incredible story is well documented historically, and is the basis of such stories as Rip van Winkle. The patron of this icon wanted to include a dormouse, which spends almost half its life hibernating, and whose name in German, Siebenschläfer, is literally named "Seven Sleepers" after these saints.