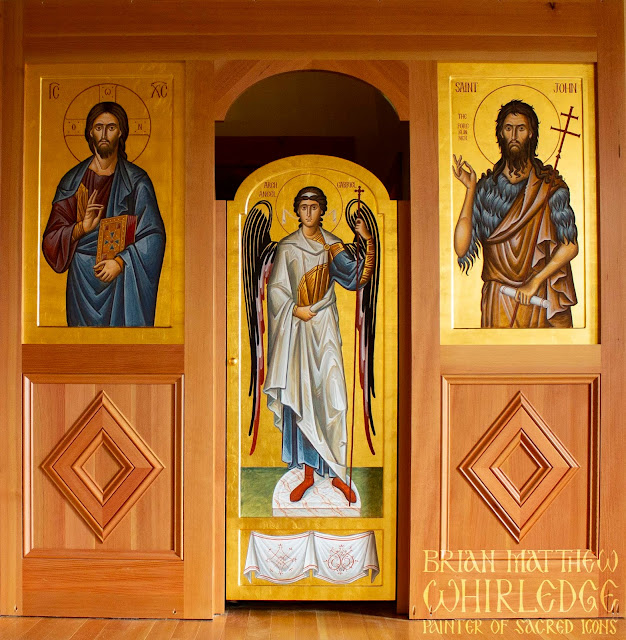 I recently completed two icons of the Archangel Gabriel for the iconostasis of St. Mary's Orthodox Church, Painted Post, New York. One was for the Holy Doors as part of the Annunciation. The other was for the south Deacon's Door. Both were painted in egg tempera with gold on birch panels. 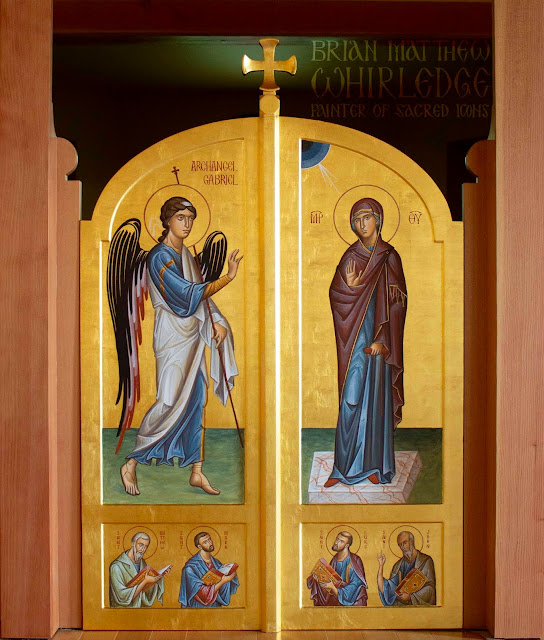 From the Prologue of Ohrid, by Saint Nikolai (Velomirovic) of Zica:
The great Archangel Gabriel's appearances and marvels through the whole history of the salvation of mankind are commemorated on this day, July 13. It is reckoned that this observance was first instituted on the Holy Mountain in 982, during the patriarchate of Nicolas Chrysoverges (979-91), and was occasioned by the Archangel's appearing in a cell near Karyes, where, with his finger, he wrote the hymn to the Mother of God: 'It is meet ... '. As a result of this occurrence, the cell was named, and is called to this day, 'It is meet Linked with this, other appearances of the Archangel Gabriel are commemorated, such as his appearing to Moses when he was keeping Jethro's flocks, when he revealed to this great man, chosen by God, how the world was created and all the rest that Moses later wrote down in the Book of Genesis; his appearing to Daniel and the imparting of the mystery of the kingdoms to come and the coming of the Saviour; his appearing to St Anna and the promise of a daughter, the most blessed and pure Virgin Mary; his very brief appearing to the holy Virgin while she was living in the Temple in Jerusalem; his appearing to Zacharias the high priest and the news of the birth of John the Forerunner, and the punishing of the same with dumbness because he did not believe the angel's words; his appearing once again to the holy Virgin in Nazareth, and the annunciation of the conception and birth of the Lord Jesus Christ; his appearing to righteous Joseph, to the shepherds near Bethlehem, to the Lord Himself in the Garden of Gethsemane when he strengthened the Lord, as man, before His Passion: his appearing to the myrrh-bearing women, and his other appearances. 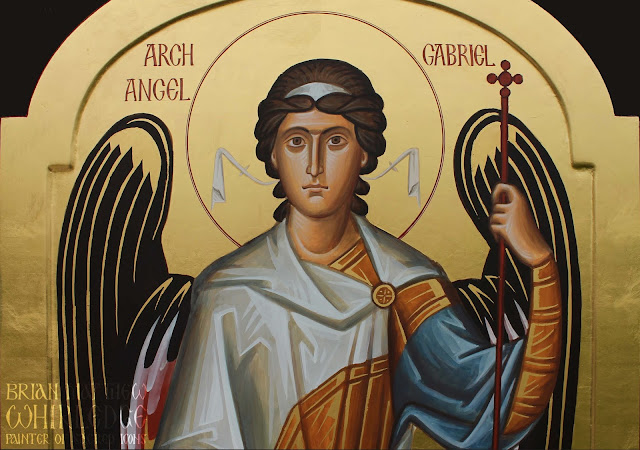