Today I completed a miniature icon of Saint Dunstan, Archbishop of Canterbury (+988).  This is my first icon of Saint Dunstan, and is also one of my smallest (3x5").  I have always felt a close connection to this saint: I was born on his feast day (May 19), he was English, he was an artist, and a musician.  Because of his association with bells, this icon will be placed in a outdoor shrine near our bell at St. Mary's Orthodox Church in Goshen. 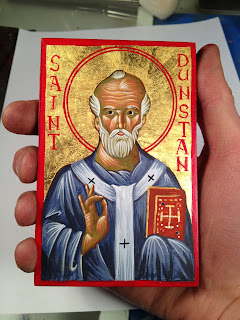 St. Dunstan was from Glastonbury (home of the Glastonbury Thorn, which grew from the staff of St. Joseph of Arimathea when he planted staff in the ground when he evangelized England after the Resurrection of Christ).   St. Dunstan led a cultural and monastic revival in tenth century England, which had been ravaged by the vikings.  He established many monasteries.  He encouraged the arts; Glastonbury became a center of culture.  St. Dunstan became Archbishop of Canterbury, and advised kings (of whom was St. Edward the King-Martyr).  As a visual artist, St. Dunstan was an iconographer, illuminated manuscripts, designed vestments, cast bells, was a goldsmith and made holy vessels from precious metals (such as chalices and censers). Below is a manuscript which St. Dunstan illuminated, and contains a self portrait of the humble Dunstan prostrate at the feet of the mighty Christ. 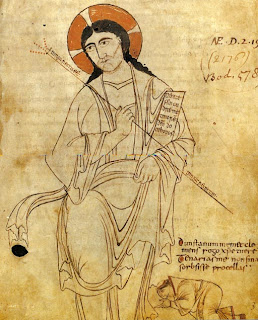 As a musician, St. Dunstan composed hymns for the Church.  He played on a harp to accompany the nuns of his abbey as they worked.  His dying words were sung from the Psalms of David. One surviving hymn is "Kyrie Rex Splendens," which Saint Dunstan, in a vision during Mass, heard the angels in heaven  singing.  He quickly wrote it down to preserve it.  It is sung below.

Troparion, Tone 8:
By thee, O Dunstan, hath the whole land of England been wondrously adorned, for thou didst labor unceasingly to restore all the monastic houses laid waste by the heathen, to people them again with zealous monks and nuns, and to provide them with strict rules of pious order wherewith to govern their lives. Wherefore, the Church of Christ doth ever praise thine all-honorable name, O holy bishop.

Kontakion, Tone 3:
Like a master helmsman, O Dunstan, thou didst ably pilot the ship of Church and state in England, skillfully avoiding the treacherous rocks and reefs hidden beneath the tides of thy times, and bringing it safely to the calm harbour of heaven, fully laden with its freight of men's souls, which thou didst deliver, rejoicing, to Christ thy Master.
Source