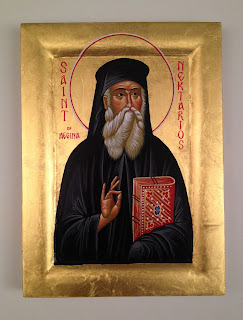 Saint Nektarios, acrylic and 23k gold on panel, 9"x12"
Today, I completed this icon of Saint Nektarios, to the glory of God, who is wondrous in His saints.
Saint Nektarios was born in Thrace (central Greece) in 1846, grew up in Constantinople, attended seminary and became a monk.  The Patriarch (Pope) of Alexandria summoned him to Egypt, where he was quickly ordained Priest and Bishop.  He was slandered by his brother clergy, and he returned to Greece, humiliated, where he became an itinerant preacher.  He forgave his slanderers. 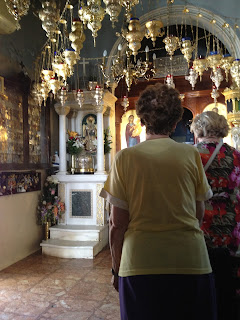 This is the chapel in the convent on Aegina where St. Nektarios served.  His holy skull is in the shrine on the left.
He eventually settled in Aegina (an island near Athens), where he founded a women's convent.  He devoted his life to prayer.  He was seen floating above the ground when he prayed.  Through his prayers, he healed the sick and cast out demons, and saved Aegina from drought.  He worked many miracles during his lifetime, but many more since his repose.  He fell asleep in a hospital in Athens in 1920.  The hospital filled with a heavenly aroma.  Immediately after his death, a nurse tossed his sweater onto the next bed, which instantly healed the paralytic who was lying there.  He has healed many people of their illnesses, and he is especially well known for healing cancer.
On my last day in Greece this summer, I went on a pilgrimage to Aegina.  I visited his monastery and venerated the holy relics of St. Nektarios.  I wrote about it here.

Pray to God for us, O Wonderworker Nektarios.

Troparion To St. Nektarios
The offspring of Selyvria and the guardian of Aegina, the true friend of virtue who appeared in the last years. O Nektarios, we faithful honor you as a Godly servant of Christ. For you pour out healings of every kind for those who piously cry out, glory to Christ Who has glorified you, glory to Him Who has made you wondrous, glory to Him Who works healings for all through you.

St. Nektarios also gave us this beautiful hymn "Αγνή Παρθένε" or "O Virgin Pure," which he wrote down after hearing angels singing these praises to the Virgin Mother of God.