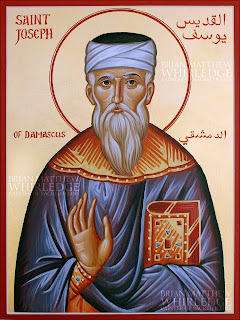 Saint Joseph, a priest in Damascus (Syria), competed victoriously for Christ, winning the crown of martyrdom in a great persecution July 10, 1860. Instead of fleeing the massacre, as other able Christians did (including the parents of St. Raphael of Brooklyn), he stayed behind to confess and commune those Christians about to be slaughtered because they were too old or too ill to flee to safety. Running from rooftop to rooftop to minister the Holy Gifts to his flock, the persecutors caught up with him, and he consumed the remaining Holy Communion before being hacked apart by axes. Let us not forget the Christians in Syria who, at this very moment, are being martyred for Christ by the very same demonic insanity that slaughtered Saint Joseph and his companions over 150 years ago.
Read more at http://www.antiochian.org/st-joseph-damascus