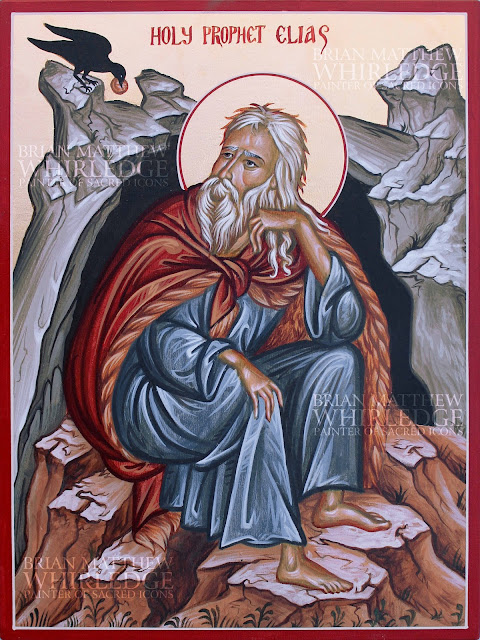 I recently finished this icon of the Holy Prophet Elias. He is sitting in the wilderness, being fed by divine providence. The composition is based on a 16th c. icon on Mount Athos by Michael Damaskinos. Rocky terrain is always a joy to paint, and this icon gave me plenty of opportunity! This icon is available for purchase--please contact me if interested!
On July 20 in the Holy Orthodox Church, we commemorate the fiery ascent as it were into the Heaven of the holy and glorious Elias (Elijah) the Tishbite.


Elias was born in the town of Tishba for which he was called the Tishbite. When Elias was born, his father Savah saw an angel of God hovering around the child, wrapping the child in fire and giving him a flame to eat. This foreshadowed Elias’s fiery character and his God-given fiery power. Elias confronted the Israelite King Ahab and his evil wife Jezebel. They worshipped idols and were turning the people away from serving the One and Living God. Jezebel, a Syrian, persuaded her husband to erect a temple to the Syrian god Baal. Through great miracles Elias displayed the power and authority of God: he closed up the heavens, so that there was not any rain for three years and six months; he lowered a fire from heaven and burned the sacrifice to his God which the pagan priests of Baal were unable to do; he accurately prophesied to Ahab that the dogs will lick up his blood and to Jezebel that the dogs will consume her flesh. Before his death Elias took Elisha and designated him as his successor in the prophetic calling. Elias was taken up into the heavens in a fiery chariot by flaming horses. He appeared on Mount Tabor to our Lord Jesus Christ together with Moses on the Transfiguration. Before the end of the world Elias will appear again to put an end to the power of the anti-Christ (Revelation, Chapter 11).
By the intercessions of Thy Saint, O Christ our God, have mercy on us. Amen.
From the Synaxarionhttp://www.antiochianladiocese.org/news_110712_1.html