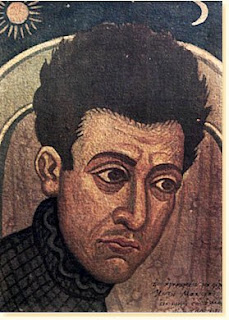 An iconographic portrait of Kontoglou.
On this day in 1965, the ever-memorable blessed Photios Kontoglou fell asleep in the Lord. He was an iconographer, chanter, and writer. He brought about the revival of traditional orthodox iconography in the mid 20th century. I will repost one of his writings in iconography.
May his memory be eternal.

What Orthodox Iconography Is

The religion of Christ is the revelation, by Him, of the truth. And this truth is the knowledge of the true God and of the spiritual world. But the spiritual world is not what men used to—and still do—call "spiritual."
Christ calls His religion "new wine" and "bread that cometh down from Heaven." The Apostle Paul says, "Therefore, if any man be in Christ, he is a new creation. The old things have passed away: behold, all things have become new."

In a religion like this, one that makes the believer into a "new man," everything is "new." So, too, the art that gradually took form out of the spirit of this religion, and which it invented to express its Mystery, is a "new" art, one not like any other, just as the religion of Christ is not like any other, in spite of what some may say who have eyes only for certain meaningless externals.

The architecture of this religion, its music, its painting, its sacred poetry, insofar as they make use of material media, nourish the souls of the faithful with spirit. The works produced in these media are like steps that lead them from earth up to heaven, from this earthly and temporary state to that which is heavenly and eternal: This takes place so far as is possible with human nature.

For this reason, the arts of the Church are anagogical, that is, they elevate natural phenomena and submit them to "the beautiful transformation." They are also called "liturgical" arts, because through them man tastes the essence of the liturgy by which God is worshipped and through which man becomes like unto the Heavenly Hosts and perceives immortal life.

Ecclesiastical liturgical painting, the painting of worship, took its form above all from Byzantium, where it remained the mystical Ark of Christ's religion and was called hagiographia or sacred painting. As with the other arts of the Church, the purpose of hagiographia is not to give pleasure to our carnal sense of sight, but to transform it into a spiritual sense, so that in the visible things of this world we may see what surpasses this world.

Hence this art is not theatrically illusionistic. Illusionistic art came into being in Italy during the so-called Renaissance, because this art was the expression of a Christianity which, deformed by philosophy, had become a materialistic, worldly form of knowledge, and of the Western Church, which had become a worldly system. And just as theology followed along behind the philosophy of the ancients—so, too, the painting which expressed this theology followed along behind the art of the ancient idolators. The period is well named Renaissance, since, to tell the truth, it was no more than a rebirth of the ancient carnal mode of thought that had been the pagan world's.

But just as those theologians were wading around in the slimy swamp waters of philosophy, and were in no position to taste and understand the clear fresh water of the Gospel, "drawn up to life eternal," so, too, the painters who brought about the Renaissance were in no position to understand the mystical profundity of Eastern liturgical iconography, the sacred art of Byzantium. And just as the theologians thought that they could perfect Christ's religion with philosophy, since for them it seemed too simple, they being in no position to penetrate into the depths of that divine simplicity: just so, the painters thought that they were perfecting liturgical art, more simply called Byzantine, by making it "more natural."

This is why their works have no Mystery, nor any real spiritual character. You understand that you have before you some men masquerading as saints—not real saints. Look at the various pictures of the Mother of God. "Madonnas" who pose hypocritically, and those in tears, weeping, which are even falser yet! Corpses and idols for shallow men! Our people, who for centuries have received a great and profound nurture from Christ's religion, even though outwardly they seem uneducated, call a woman who pretends to be respectable but who is really not, a Frankopanayhia, a "Frankish Virgin," thus making a clear distinction between the "Frankish Virgin" and the true Virgin, the Mother of Christ our God, the austere Odogitria, Her "more precious than the Cherubim, and beyond compare more glorious than the Seraphim". In other words, in the simplest way possible they make a neat, sharp distinction between the art of the world and the art belonging to worship.

Western religious painters who wanted to depict the supernatural visions of religion took as models certain natural phenomena—clouds, sunsets, the moon, the sun with its beams. With these they tried to portray the heavenly glory and the world of immortality, calling certain things "spiritual" which are merely sentimental, emotional, not spiritual at all.

In vain, however. Because the blessedness of the other life is not a continuation of the emotional happiness of this world, neither does it have any relation to the satisfaction the senses enjoy in this life. The Apostle Paul, talking about the good things of the blessedness to come, says that they are such that "eye hath not seen, and ear hath not heard, neither have entered into the heart of man."
How, then, can that world, which lies beyond everything a man can grasp with his senses—how can that world be portrayed by an art that is "natural" and that appeals to the senses? How can you paint "what surpasses nature and surpasses sense"?

Certainly, man will take elements from the perceptible world, "for the senses' sake," but to be able to express "what surpasses sense" he must dematerialize these elements, he must lift them to a higher plane, he must transmute them from what is carnal into what is spiritual, just as faith transmutes man's feelings, making them, from carnal, into spiritual. "I saw," says St. John of the Ladder, "some men given over with passion to carnal love, and when they received the Light and took the way of Christ, this fierce carnal passion was changed inside them, with divine grace. into a great love for the Lord."

Thus, even the material elements which Byzantine iconography took from the world of sense were supernaturally transmuted into spiritualities, and since they had passed through the pure soul of a man who lived according to Christ, like gold through a refiner's fire, they express, as far as is possible for a man who wears a material body, that which the Apostle Paul spoke of, "which eye hath not seen, neither hath entered into the heart of man."

The beauty of liturgical art is not a carnal beauty, but a spiritual beauty. That is why whoever judges this art by worldly standards says that the figures in Byzantine sacred painting are ugly and repellent, while for one of the faithful they possess the beauty of the spirit, which is called "the beautiful transformation."

And the blessed and hallowed St. John of the Ladder says, "There was an ascetic who, whenever he happened to see a beautiful person, whether man or woman, would glorify the Creator of that person with all his heart, and from a mere glance his love for God would spring afresh and he would pour out on his account a fountain of tears. And one marveled, seeing this happen, that for this man what would cause the soul of another to stink had become a reason for crowns and an ascent above nature. Whoever perceives beauty in this fashion is already incorruptible, even before the dead shall rise in the common Resurrection,"
"Be ye not conformed to this world, but be ye transformed by the renewing of your mind . . ." (Rom. xii. 2)