The feast of the Chief Apostles Peter and Paul is celebrated on 29 June each year.  Both apostles share the same feast day since both were martyred in Rome on the same day, 29 June AD 67.  Peter was crucified upside down and Paul was beheaded.


Adrian and I had the awesome and providential blessing of celebrating the feast of Ss. Peter and Paul in both Thessaloniki and Athens, two cities where St. Paul preached the Gospel. We attended vespers at St. Demetrios in Thessaloniki. There was a solemn procession around the church with a large icon of St. Paul. It was placed in the center for the people to venerate. 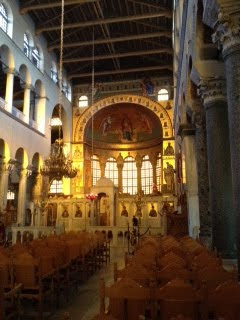 We returned to the train station to find an impressive sight: the chapel was full of people at 10:30 celebrating the feast with a vigil. Remember this is a chapel in a train station and it was packed. This is a testimony to the growth of the faith first brought to this city by the Apostle Paul. Other signposts would be the icons in the bus station, icons in the public bus, in the taxis, in every store and cafe.

We took an overnight train to Athens. Again, it was regrettable. The woman in front of us had 2 puppies. Another couple couldn't stop yelling and/or screaming for the whole ride. Thanks to exhaustion, earplugs and Advil pm, I slept for most of the ride.
We arrived in Athens at 5:30. I did not make it to St. Irene for Orthros at 7:00, but I did make it to Liturgy at 8:30.

After the customary post-liturgical coffee, I returned to the apartment to wake up Adrian (who did not sleep a wink on the train).

We saw the acropolis and the Areopagus, which we though was appropriate for the feast of the Apostle Paul. At the acropolis we lamented that the Christian history of these places is completely overlooked. The parthenon was a Christian Church dedicated to the Virgin Mary for a thousand years...centuries longer than it was a pagan temple.  German interference has made the pagan, pre-Christian Greece the ideal, and the great Christian history into a narrative of decline. "The destruction of the Parthenon began with Christians..." was the only acknowledgement of the museum that it was a church. It's ok, despite what the nations wish Greece was, Adrian and I saw the soul of Greece in the Holy Mountain and the Thessaloniki train station. Besides, the Christian graffiti still bears a silent witness to the true history of the place. 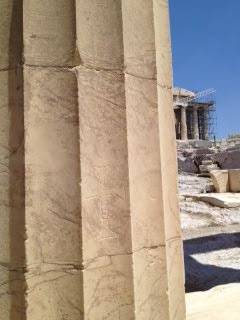 In the evening, we returned for vespers at Areopagus. I got us lost in Plaka and we ended up skirting the south edge of the agora. We could see the Areopagus, but couldn't get to it. The trail spit us out on Απόστολου Πάυλου (Apostle Paul Street). I at least knew how to get there from that point. As I was kicking myself for making us late, we began to hear a marching band far off. It got louder the closer we got to Διονύσιου Αρεοπάγιτου (St. Dionysios the Areopagite Street). We found the source of the band: there was a grand parade with hundreds of priests (four of them were carrying a life size icon of the apostle Paul), dignitaries, a military band, and many soldiers. Hundreds of people lined the street, crossing themselves when the icon passed. They joined the end of the procession, and Adrian and I joined them. Providence, not mine ineptitude, led us on the wrong way.

The parade ended with great pomp. The priests assembled at the base of the Areopagus and the four priests with the icon ascended the hill, where the Archbishop was waiting. The national TV cameras were rolling. The band played and the soldiers stood in rank at attention.  The priests placed the icon in a stand in front of a cross, on the spot where the Apostle to the Gentiles gave his famous speech.
Between 500 and 1,000 people were crowded around the base of Areopagus; it is not a large area.

The band silenced, and the archbishop gave the blessing to begin vespers: "Blessed is our God always, now and forever, and unto ages of ages. Amen."

The verses for the Apostle Paul filled the air.  Church bells rang continuously throughout the city. Wind whipped past the priests holding his icon on the hill.  We could not but be moved to emotion.

Psalm 140/141 was chanted and the deacons began the great censing around the hill and through the crowd.

Incense filled the open air as the wind tried to diffuse it.

After chanting "O Gladsome Light," the appointed time for reading was upon us.  From the same place on the hill and the original speech, the direct successor of the apostle Paul, Archbishop of Athens Ieronymos solemnly read the speech with converted the philosophers:

Now while Paul waited for them at Athens, his spirit was provoked within him when he saw that the city was given over to idols. Therefore he reasoned in the synagogue with the Jews and with the Gentile worshipers, and in the marketplace daily with those who happened to be there. Then certain Epicurean and Stoic philosophers encountered him. And some said, "What does this babbler want to say?"

Others said, "He seems to be a proclaimer of foreign gods," because he preached to them Jesus and the resurrection.

And they took him and brought him to the Areopagus, saying, "May we know what this new doctrine is of which you speak?  For you are bringing some strange things to our ears. Therefore we want to know what these things mean."  For all the Athenians and the foreigners who were there spent their time in nothing else but either to tell or to hear some new thing.

Then Paul stood in the midst of the Areopagus and said, "Men of Athens, I perceive that in all things you are very religious; for as I was passing through and considering the objects of your worship, I even found an altar with this inscription: TO THE UNKNOWN GOD.


Therefore, the One whom you worship without knowing, Him I proclaim to you:  "God, who made the world and everything in it, since He is Lord of heaven and earth, does not dwell in temples made with hands. Nor is He worshiped with men's hands, as though He needed anything, since He gives to all life, breath, and all things. And He has made from one blood every nation of men to dwell on all the face of the earth, and has determined their preappointed times and the boundaries of their dwellings, so that they should seek the Lord, in the hope that they might grope for Him and find Him, though He is not far from each one of us; for in Him we live and move and have our being, as also some of your own poets have said, 'For we are also His offspring.'  Therefore, since we are the offspring of God, we ought not to think that the Divine Nature is like gold or silver or stone, something shaped by art and man's devising. Truly, these times of ignorance God overlooked, but now commands all men everywhere to repent, because He has appointed a day on which He will judge the world in righteousness by the Man whom He has ordained. He has given assurance of this to all by raising Him from the dead."

And when they heard of the resurrection of the dead, some mocked, while others said, "We will hear you again on this matter."So Paul departed from among them. However, some men joined him and believed, among them Dionysius the Areopagite, a woman named Damaris, and others with them. Acts 17:16-34 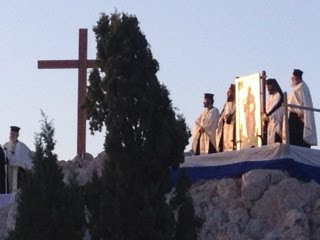 Over the past several weeks, I have experienced the effects of this sermon and the power of Christ.

Two millenia later, the pagan temples are in ruins and the nation is full of churches with standing room only on weekday nights. Through the prayers of the All-Praised Chief Apostles Peter and Paul, O Christ Our God, have mercy on us and save us. Amen.