Saturday, 30 June: The Synaxis of the 12 Apostles and St. Michael the Gardener

On 30 June, the day after the chief Apostles Peter and Paul, the Holy Orthodox Church celebrates the synaxis (gathering) of the 12 apostles.  Since the Apostle Matthew is my patron saint, this day is one of my name's days (the primary being the feast of his martyrdom, 16 November).
Adrian and I chanted in the choir at Orthros and Liturgy at St. Irene.  We arrived in the middle of Orthros and were welcomed to sing.
After Liturgy, we gathered in the priest's office for coffee.  We spent a few hours talking to two cantors, Taso Stellas (a professional Opera singer and a computer programmer) and Demetrios Gallos (an actor in television dramas).  We mostly discussed cultural differences between America and Greece.
Greeks have a strong national identity. They are a tribe: sharing the same ancestry, faith, language, history, culture, music, etc.  Every Greek knows which village his grandmother is from.  The faith and language helped preserve their national identity during centuries of Turkish slavery.
Americans on the other hand have no such bond, other than we live in the same place, and most Americans speak English.  There is no common bond to unite Americans, as this land is a melting pot.  The cultures, history, and language of our ancestors were lost, while Protestants brought their multitude of fractured sects.
Our friends were shocked that we did not know offhand the villages in Germany and England where our ancestors were from.
Another shock to both parties is that of income.
"How much do you make in America?  While not particularly offended, and thought they asked out of curiosity to compare cost of living, I did explain how this is quite a private matter. However, in Greece, ones income is common conversation.
"I got a new job."
"That's great! How much will you make?"
or
"I got a raise!"
"Congratulations! How big of a raise?"
Demetrios' jaw hit the floor when he learned that Adrian and I have been friends for 10 years and did not know what the other earned.  Or that we did not know our parents' salaries.  Or that Adrian and his girlfriend do not know each other's salaries. Or that some American married couples do not see each others' check stubs.
After talking for a couple hours, noon was approaching (I love the earlier starting times for liturgies in Greece).  We walked down the street from St. Irene's to the Fish Spa.  I was meeting with Fotis Dionysopoulos to get a scale to weigh our luggage.  I also lost a shirt from the clothesline and was wondering if it was possible to retrieve it, or if it belonged to the ages.
Fotis warmly greeted us at the Fish Spa and sat down with us in his Zen garden outside. 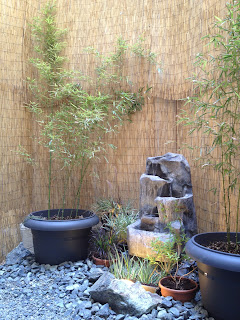 We shared our experience on Mount Athos.  He was disappointed that we only spent one day.  In 1999, he spent a week there and walking from monastery to monastery. After he was sufficiently convinced that we were having a great time, he came with us to retrieve the shirt.  First, we got a key from the book peddler on the street below the apartment.  We ascended a flight of stairs to a floor not accessible by elevator.  We opened a door, and I climbed through a window to the tiny courtyard where my shirt was.
In the afternoon, Adrian and I went to the Olympeion, or the Temple of Zeus. 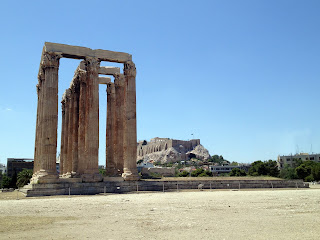 30 June is not only the feast of the 12 apostles, but also the commemoration of the beheading of the martyr Michael Baknanas.  St. Michael was a gardener in Athens. 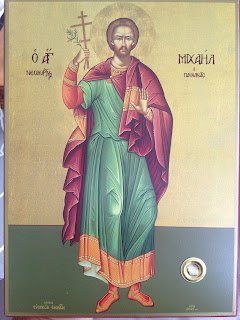 When he was 18 years old, Turks captured him, falsely accused him, tried to force him to convert to Islam and finally killed him.  He was lead to the Temple of Zeus (which was being used as a mosque at that time).  Along the way, he asked forgiveness from all Christians he met.  At the temple, the executioneer hit his neck with the blunt side of the sword to scare and to give him one last chance to convert.  St. Michael's last words were, "Strike for the Faith!"  He was beheaded on 9 July 1771.  The church remembers him on 30 June each year.  On the pillar where he was beheaded, faithful Christians left this inscription: "1771 Ιουλίου 9 απεκεφαλίσθη ο Πακνανάς Μιχάλης" (July 9th 1771 Michael Paknanas was beheaded).  The illumined pillar (the furthest right) has the inscription which was clearly visible in person, but difficult to photograph. St. Michael is a patron saint to gardeners, dieticians, and nutritionists. 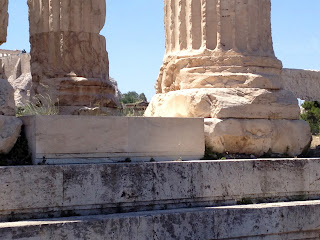 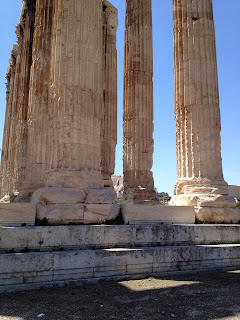 I heard rumors that a liturgy is celebrated there each year on 30 June, but could not nail down any specifics, so Adrian and I went to St. Irene in the morning.  Nevertheless, it was moving to visit this holy site on his feast, just as it was to be on the Areopagus for the feast of the Apostle Paul.