The Meeting of the Lord 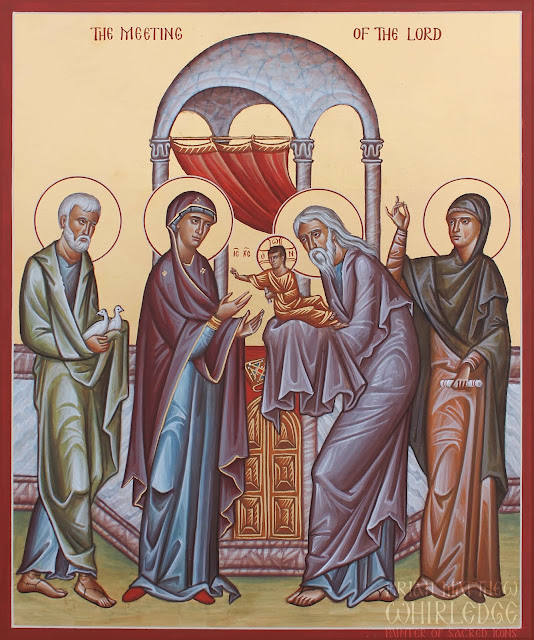 From the Synaxarion of the Feast

On February 2 (40 days after the Lord's Nativity), we celebrate the Meeting (Presentation) of our Lord, God and Savior Jesus Christ in the Temple, wherein the righteous Simeon received Him into his arms.
The Greek word for the feast is “Hypapante” which means “Encounter” or “Meeting.” However, this was not just some chance encounter. This feast, which closes the cycle of the Nativity of our Lord, God, and Savior Jesus Christ, reminds us that on the fortieth day after the birth of her first-born Son, Mary carried Him to the Temple in accordance with the Mosaic Law to offer Him to the Lord, and to ransom Him by the sacrifice of a pair of turtle-doves or two young pigeons (Luke 2:22-37). In one of many acts of extreme humility, the divine Word thus lowers Himself and submits to the law in order to fulfill it. This lowering is also Jesus’ first official encounter with His people in the person of Simeon. It is not only an encounter, but also a manifestation. Simeon bears in his arms the One he knows to be the Salvation of the world, “a light to lighten the Gentiles, and the glory of Thy people Israel.” His endearing prayer, as found in the Gospel of Luke, endures in the Orthodox Church to this day. The Church considers this celebration as a Feast of the Theotokos in praise of her role in this Presentation, and her connection in the work of her Son. “Adorn thy chamber, O Zion, and receive Christ the King. Welcome Mary the heavenly gate; for she hath appeared as a cherubic throne; she carrieth the King of glory” (Aposticha of Great Vespers). The Virgin today accompanies the Child in His first offering to the Father; she will also accompany Him even to the realization of His sacrifice for humanity.
Unto the very God be glory and dominion unto the ages. Amen.

At that time, the parents brought the child Jesus up to Jerusalem to present him to the Lord (as it is written in the law of the Lord, "Every male that opens the womb shall be called holy to the Lord") and to offer a sacrifice according to what is said in the law of the Lord, "a pair of turtle doves, or two young pigeons."
Now there was a man in Jerusalem, whose name was Symeon, and this man was righteous and devout, looking for the consolation of Israel, and the Holy Spirit was upon him. And it had been revealed to him by the Holy Spirit that he should not see death before he had seen the Lord's Christ. And inspired by the Spirit he came into the temple; and when the parents brought in the child Jesus, to do for him according to the custom of the law, he took him up in his arms and blessed God and said,
"Lord, now let your servant depart in peace, according to your word; for my eyes have seen your salvation which you have prepared in the presence of all peoples, a light for revelation to the Gentiles, and for glory to your people Israel."
And his father and his mother marveled at what was said about him; and Symeon blessed them and said to Mary his mother, "Behold, this child is set for the fall and rising of many in Israel, and for a sign that is spoken against (and a sword will pierce through your own soul also), that thoughts of many hearts may be revealed."
And there was a prophetess, Anna, the daughter of Phanuel, of the tribe of Asher; she was of a great age, having lived with her husband seven years from her virginity, and as a widow till she was eighty-four. She did not depart from the temple, worshiping with fasting and prayer night and day. And coming up at that very hour she gave thanks to God, and spoke of him to all who were looking for the redemption of Jerusalem.
And when they had performed everything according to the law of the Lord, they returned into Galilee, to their own city, Nazareth. And the child grew and became strong, filled with wisdom; and the favor of God was upon him.

Apolytikion of the Feast

Rejoice, O Virgin Theotokos, full of grace, for from thee arose the Sun of justice, Christ our God,
lighting those who are in darkness. Rejoice and be glad, O righteous elder, carrying in thine arms
the Deliverer of our souls, Who granteth us Resurrection.

A Homily by St. Sophronius of Jerusalem (7th century)

“The true light has come, the light that enlightens every man who is born into this world. Let all of us, my brethren, be enlightened and made radiant by this light. Let all of us share in its splendor, and be so filled with it that no one remains in the darkness. Let us be shining ourselves as we go together to meet and to receive with the aged Simeon the light whose brilliance is eternal. Rejoicing with Simeon, let us sing a hymn of thanksgiving to God, the Father of the light, who sent the true light to dispel the darkness and to give us all a share in his splendor. Through Simeon’s eyes we too have seen the salvation of God which he prepared for all the nations and revealed as the glory of the new Israel, which is ourselves. As Simeon was released from the bonds of this life when he had seen Christ, so we too were at once freed from our old state of sinfulness. By faith we, too embraced, Christ, the salvation of God the Father, as he came to us from Bethlehem. Gentiles before, we have now become the people of God. Our eyes have seen God incarnate, and because we have seen him present among us and have mentally received him into our arms, we are called the new Israel. Never shall we forget this presence; every year we keep a feast in his honor.”