Of course I had to eat something today.  Taking Fotis' advice, I went to his favorite ταβέρνα, which is literally outside the door of my apartment, called Φίλεμα (Filema).  A ταβέρνα or taverna is an outdoor, informal Greek restaurant. 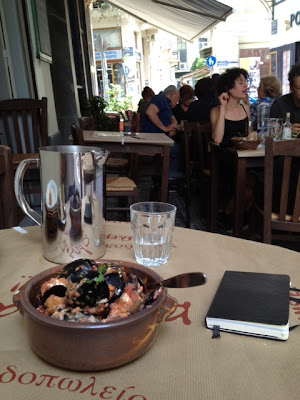 The food was fantastic.  First came bread, then ouzo, then my order, which was fried mussels in a tomato-feta cheese sauce with parsley and onions, and served in a handmade ceramic bowl. I am really going to enjoy the seafood while I'm here, especially with the Apostles Fast coming up here soon. Sometime I'll venture to Piraeus, the port of Athens, to eat some fresh seafood there. The meal was concluded with some kind of dessert, which was almost like custard topped with chocolate. The highlight of dinner (well, besides the fantastic mussels) was a street band that showed up and played a couple of songs. When I figure out how to upload music, I will post a song I recorded from the band.

I'm really enjoying the music here. There are musicians at just about every major pedestrian street corner, including a guitarist who is sitting right below my open window right now as I write.

After dinner, I succumbed to a nap after figuring out how to get back into my apartment.  Just look at the key! Turns out, it takes -144 degrees (that's four turns to the left) to unlock. 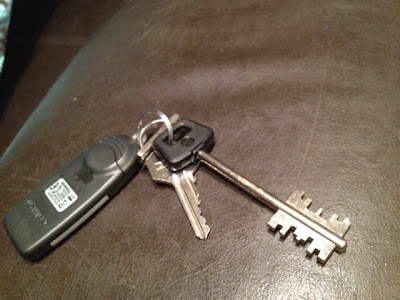 There's my Greek key. Yes, it's that big compared to a "normal" key.

Next, I decided to walk around a bit. I went back to Monastiraki Square, and for some reason didn't buy some fresh fruit. I guess I will tomorrow.  Just beyond Monastiraki Square is Hadrian's Library. I don't know anything about that, so I'll have to look it up. Just past Hadrian's Library is another church dedicated to the Virgin Mary who is "quick to hear" our prayers. I'll bet there are a dozen churches within a 5-minute walk of my apartment. The impressive thing about the churches is that they are all open. Not only that, but there is a steady stream of people stopping by to say prayers, light a candle, or kiss an icon. The churches prohibit photography, or else I would share that with you.

Just a block from my apartment is the Metropolitan Cathedral of Athens. It is undergoing substantial renovations and does not appear to be open for services, but people were still there to pray. There are actually two churches in the complex. One is the older building, affectionately called the "Little Metropolis." The newer (19th century) is the larger one in the background, covered in scaffolding. 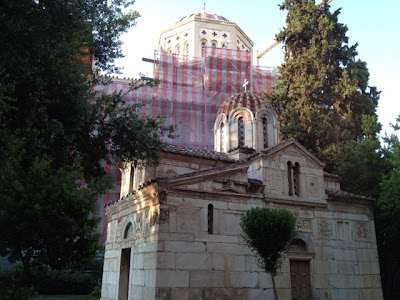 Two saints have their relics there: the Hieromartyr Gregory, Patriarch of Constantinople, and the Righteous-martyr Philothei of Athens. Both of these saints were martyred by the Turks at different times. St. Gregory was lynched on the gate of the Patriarchate on Pascha 1821, and the door has been sealed to this day.


St. Philotei founded a convent and was tortured to death by the Turks in the 16th century.


In the square outside the Metropolis is an awesome statue of the last Roman Emperor, Constantine IX Paleologos, who died defending his people against the Turks when they conquered Constantinople on 29 May 1453. 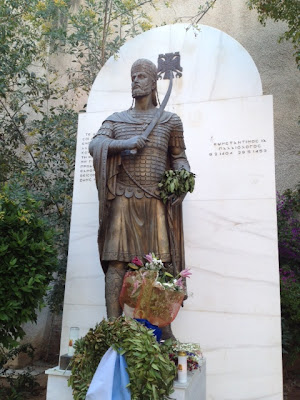 Just outside the Metropolis is "church supply row," where for blocks, there are (you guessed it!) nothing but church supply stores. I have the feeling that I will return at some point... and hopefully I don't spend too much money...

I was pretty proud of myself for negotiating the sale of a lamp counter-weight entirely in Greek with the shopkeeper who can't speak English. Side-note to St. Mary's: we won't have to use the ladder anymore to light that lamp above the holy doors. 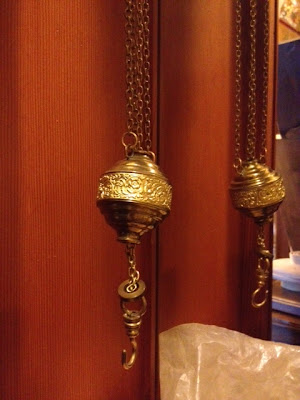 Since I needed a dose of humility after that, the shopkeeper at the pharmacy greeted me in English and wouldn't speak a word of Greek to me. I didn't think I'd stand out as an American tourist that much...