I've been in Greece four hours now and here are my unedited stream-of-consciousness first impressions:

Half of that time was in the airport (customs, baggage claim, etc.) and riding the metro into town. No notable differences from America, other than the fact that there is actually public transportation.

Alongside the metro were four-lane highways, with on-ramps, road signs, and interchanges essentially identical to America, except that the signs are in Greek first, then English.  A few observations worthy of note:
1. The soil is red.
2. Many "Mediterranean" plants (cypress trees and other shrubs not seen in Indiana)
3. All the houses are stucco with red clay tile roofs (awesome!)
4. Many abandoned industrial/commerical buildings, many with dilapidated billboards on the roofs.
5. Graffiti is a popular and developed art form.

I departed the metro at Monastiraki.  I took many flights of escalators, then I had to lug my 60-pound suitcase up several more flights of stairs. The modern subway station exited into what could easily be a medieval middle-eastern market. 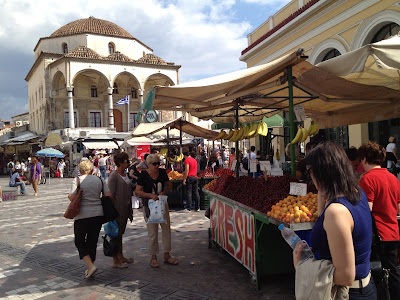 This is where I realized I was not in America anymore.

Monastiraki Square is bustling with merchants and shoppers, complete with an old church (you know it's old when it is 6 feet below the current street level) and a mosque (now defunct...it appeared to be full of shops). At this point, I was just trying to book it to meet up with Fotis, my host who owns the apartment I am staying in, so I am not investigating anything... just hurrying past.

Again, all the buildings are old and stuccoed, tile roof where the roof is sloped. The streets are very narrow, with room for only one lane of traffic (which is dominated first by mopeds and second by taxis). I walk down Ermou street towards the church of Panagia Kapnikarea (a thousand-year old church below my apartment). 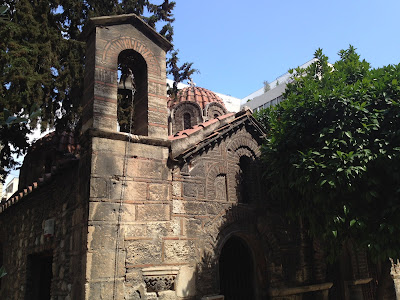 I turn just before it on Ailou street to meet Fotis at his shop. I pass Agia Eirini, where my teacher, Ioannis Arvanitis chants, as well as many other big names in Byzantine music, such as Lycourgos Angelopoulos. I keep walking, crossing a few narrow streets, dodging mopeds (keep in mind I have a 20+ pound backpack and a 60 pound suitcase). I arrive at the shop. Fotis is extremely hospitable, and gives me a warm welcome. We introduce ourselves over a glass of water (that's all I really wanted at that point). "Have you seen the Acropolis?" he asked.  "No, I just booked it here." "Well, just turn around." So I turned around and saw the bell towers of Agia Eirini framing the Acropolis: 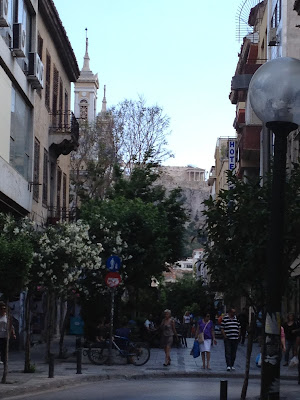 Fotis took me through a few narrow, winding streets, into a square behind a tiny hole-in-the-wall church. 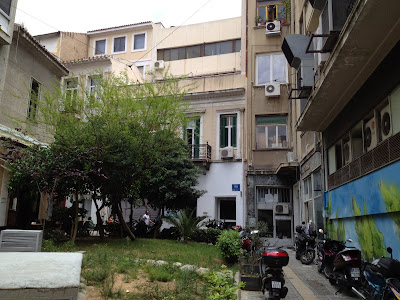 This is the entrance to my apartment.

The apartment is beautiful, newly renovated, modern, and furnished with Ikea (which we flew over, by the way... it is right beside the airport with "Όλες για το σπίτι" on the side). The apartment can be seen (with much better photos than I could take) on: www.airbnb.com/rooms/28186

One thing I'll have to get used to is not flushing the toilet paper. I guess the plumbing here just isn't made for it. 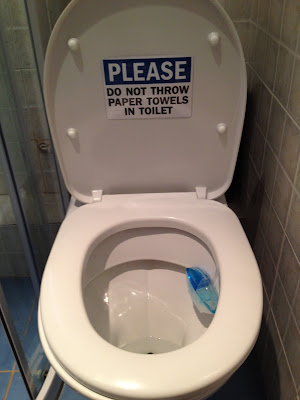 The apartment faces lively Ermou Street.  I opened the windows to hear the live music and the crowds shopping. 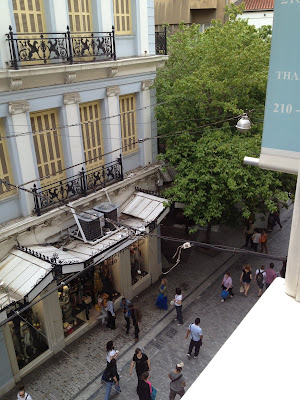 I should probably take a nap (I've only slept 3 hours since I left home 22 hours ago), but I feel like there is so much to take in!