Early Sunday morning was Orthros of course. I studied well the Anastasimatarion this week, so I felt more or less prepared to chant with the left choir. I have little problem reading the music, the greater issue is the language. Reading Greek isn't difficult for me; but it becomes difficult in the fast hymns. Practice makes better.

I received an email yesterday from a friend who said he heard me on the radio. Evidently the Church of Greece radio airs vespers live from St. Irene's on Saturdays. This would be 11:00am Saturday EST. The website is http://www.ecclesia.gr/greek/ecclesiaradio/index.asp
Or to hear what I hear every weekend, you could just look up Lycourgos Angelopoulos on youtube, or he has his own station on Pandora.

After Liturgy, Bekah and I decided to be adventurous and visit the Monastiraki Flea Market. It was a lot like flea markets in America: lots of old junk piled up to capacity. The salesmen were more pushy, and junk may have been older. This was the first time a Greek salesman took it personally when I didn't want something he was selling. In the end, it wasn't that much different than Wolf's Swap Meet in Kimmel, IN, minus the animals. 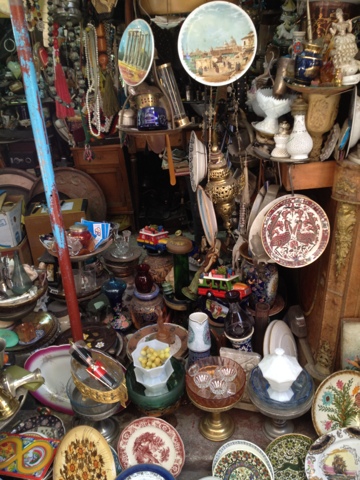 After the flea market, we walked around Adrianou Street to get some last-minute souvenirs. When got back to the apartment, we thought about something nice to do for our last afternoon together in Greece. The beach would be nice, right?

The whole experience was pretty miserable. We boarded the tram (above ground public rail transportation) at Syntagma. This was the terminal stop, so the bus was comfortably empty. At least we got seats. After the next couple stops, the bus was filled to capacity...standing room only. At least other people were dressed to go to the beach. There was no ventilation and little hygiene. At some point a gypsy family boarded. Their kids were running around and the mother was breastfeeding her baby like no one's business.

After an hour, the tram turned a corner and ran along the sea. We didn't know which stop to disembark, so we decided to go with the flow. After a couple of stops, most of the beach-goers got out, so we followed suit.

To say the beach was crowded would be an understatement. To call it a beach in the first place would be generous. Imagine a beach with pea gravel instead of sand. You couldn't take a step without stepping on a cigarette but. Empty plastic bottles and other trash blew freely. To top it off, the beach was swarming with peddlers selling sunglasses, watches, hats, etc.

After about fifteen minutes, we decided it was not going to get better (I apologize for not taking a photo...we just wanted to get out). Unfortunately, the tram was already full, so we had to go in the reverse direction for an hour, but this time crammed among the standing.

After a thorough shower, we decided to just hang out at a taverna. We ended our Greek experience eating pizza and playing checkers, which was perfect. We should have just done that from the beginning. 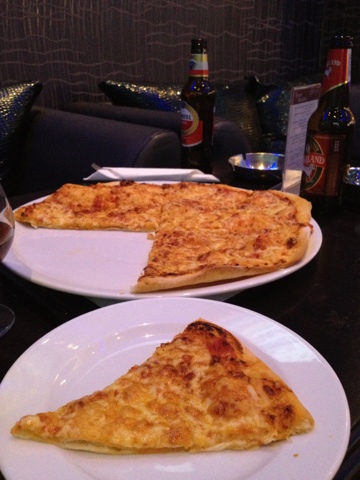