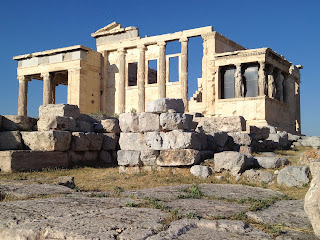 The most impressive collection is the third floor, with the bas relief friezes from the parthenon, with a visual link to the Parthenon through the massive windows, just several hundred feet away.  The museum has many parts and pieces of sculptures, completed with castings of the originals which were stolen by the British 200 years ago.  The Greeks await the return of their national treasures. 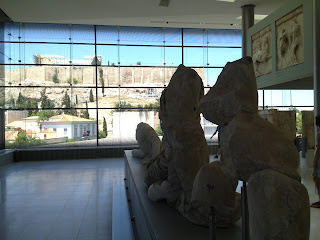 I think I would have been more impressed if I had visited the Acropolis museum before the National Archaeological Museum.  The Acropolis museum houses only the sculptures from the acropolis, which limits its collection in many ways to a specific location and time period, whereas the National Archaeological Museum has a vast collection from the entire nation from prehistory through antiquity.  A lot of famous and recognizable sculptures are housed in the NAM (there were many "Oh, that one!" moments), and most are remarkably well preserved (I suppose from being buried and undisturbed centuries).   The Acropolis collection was more exposed to the elements and vandals, and the centuries were not kind.  There were very few recognizable  sculptures, and most sculptures were in very poor condition, consisting of only one or two body parts. 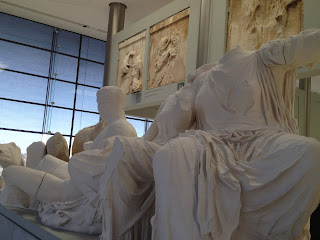 The benefits of the Acropolis museum would be the proximity to the acropolis itself, and the constant visual connection to the Parthenon itself.  While I have an extreme distaste for modern architecture (of which the brand new museum is an exquisite example of such), they have made good use of modernism by having glass floors for much of the museum, open to the excavations of the ancient city below.  The solid glass wall on the third floor is a great way to link the Parthenon sculptures to the Parthenon itself. 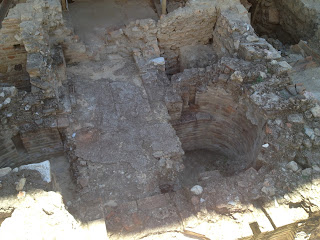 My advice when you visit Athens (because you really should) is to visit the National Archaeological Museum after the Acropolis Museum; I think you will be more impressed.

After the Acropolis Museum, Bekah and I enjoyed a great rooftop view as we ate mussels saganaki (fried in a tomato-feta sauce) and leek pies for lunch at the Psarro Taverna in Plaka. 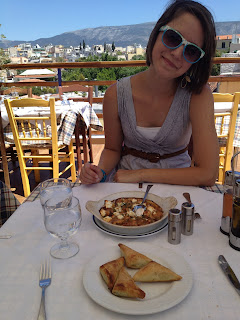 Afterwards, we wandered around Anafiotika one last time.  Anafiotika is a delightful 19th century "island" village built on the slopes of the acropolis by island carpenters brought to construct the new capital. 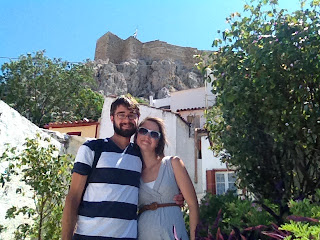 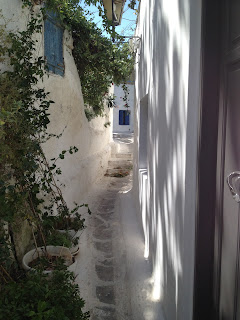 We wandered around tourist central to buy some kitsch souvenirs.  I got a good deal on a t-shirt and jacket by insisting on buying something only with "ΕΛΛΑΣ" and not "Greece."  In my argument, I said "No one calls it 'Greece,' except foreigners.  It is called 'Ελλάς' and that's where I am now, and that's what I want my shirt to say."  The shop owner was so excited she practically gave me the shirt. 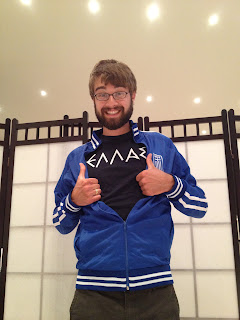 Of course I plan on wearing the jacket on recess duty this fall.
We returned to the apartment with enough time for me to sing through tonights hymns from the Anastasimatarion before vespers.  At vespers, a Russian priest chanted with the right choir, and chanted several stichera (hymns) in Slavonic, while another cantor was chanting the part of the canonarch in Greek.  It was really beautiful.  The canonarch simply intones the next line of the hymn on a single note as the cantor/choir finishes the previous line.  It is not unlike line singing in some American folk traditions.  The canonarch is a beautiful tradition of Byzantine chant that I would like bring back to Indiana.
In addition to Slavonic, Angelopoulos asked me to sing a verse of the evening prokeimenon in English.  I raked my memory to find the three verses from Psalm 92:

"The Lord is King: He has robed himself in majesty. The Lord has robed and girded himself with power.  He has made the world firm; it will not be shaken."
Unfortunately, in translation, I missed the part where he asked me to give it the long final ending, so he picked up the long final cadence from me.
After vespers, Bekah and I wandered to Syntagma Square to watch the changing of the guard.  It was an interesting ceremony.  The guards keep watch over the tomb of the unkown soldier.  They wear the traditional uniform of the revolutionaries who fought the Turks for independence.
We walked around Monastiraki until dark, and we ate dinner at Filema, the taverna literally out my apartment door.  Bekah had mussels saganaki (it's so good, we just can't get enough) and I had fried cod with garlic sauce. 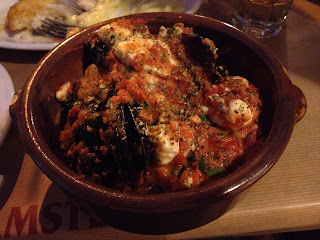 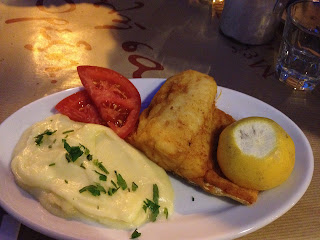