Church of the Dormition 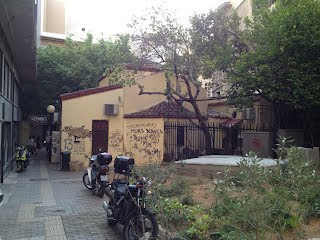 The view from the door of my apartment. There is a little square behind the very old church of the Dormition.

I stopped by the little church in the square below my apartment. The church was filled and bustling with people coming and going, praying, lighting candles, kissing icons, and giving their confessions. Fr. Chrysostomos was hearing confessions. When he was done and walked past, I asked for his blessing, but instead he slapped my hands. Most priests out and about give me a blessing, but this is the second time this happened. The first time, I thought maybe I had run into a lay monk, but Father Chrysostomos was wearing the stole, so he was a priest for sure. Still trying to figure that out.

The church has a large icon of St. Papa Nicholas Planas, a recent saint from Athens. I asked about how to visit his relics. There were several very friendly men there who were excited to hear that I am Orthodox, and studying iconography and chanting. They weren't confused that I'm Orthodox from America. The part that really confused them was the fact that I was Orthodox but my parents were not Greek. Then they began to tell me how to find the Anglican Church in Athens. I returned the conversation to the saints in Athens. Ioannis spoke some English, so between our limited use of both languages, he told me how to visit St. Papa Nicholas Planas, St. Nektarios, St. Ephraim of Nea Makri, and St. Dionysios the Areopagite. He said that this church is very old, before the war with the Turks, and that the ceiling is black from the candle soot from the centuries. Alexandros tends the candles, spoke little English, but was very friendly. He gave me an icon. It is 3D and changes as you walk past. I am grateful for his generosity, but, how can I say this, this icon is most unusual.