With Bekah, at the Acropolis 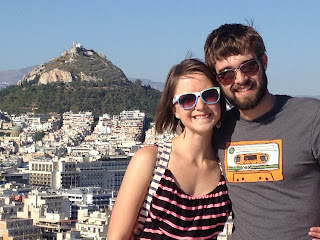 Before that, I went to liturgy at St. Demetrios in Plaka.  My friend, Stelios Georgantonis, an iconographer in Athens, introduced me to this wonderful parish that has daily services.  And it's a quick fifteen minute walk from my apartment. 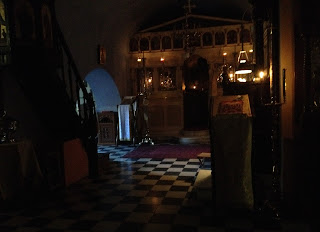 I've been to a few vespers; this is the first Liturgy.  I got there at around 6:30 to catch the end of Orthros (which started at 5:30) and the beginning of Liturgy. There were probably two dozen people there...not bad for an early weekday morning. The chanting was handled by two women, one of whom (I'm told) is the priest's wife.  This church has a main altar and nave, with a small chapel (with its own altar) on each side.  As is customary, the church mostly divides itself with men on the right and women on the left.  In the left chapel were three or four nuns.  If there is a nearby convent, then the daily services would be explained.  The Liturgy is always worth it, but it was an early start to a full day.

I checked Bekah's flight when I returned to my apartment at 8:30.  The flight was making better time than the last time I checked, so I raced to Monastiraki to catch the metro.  It only comes every half-hour; the 9:00 train should get me there about the right time, and I didn't want to leave her waiting. Turns out, one needs a special airport ticket to ride the metro to the end of the line.  The automated machine would not take a 50 and of course the ticket office was closed.  I raced to find an ATM near monastiraki, got the appropriate ticket, and got to the platform just as the train arrived.

An hour later, Bekah and I were reuninted.  We returned back to the center of the city.  Bekah took a nap while I had another lesson.  On the way to my lesson, I passed a white owl perched on a balcony. 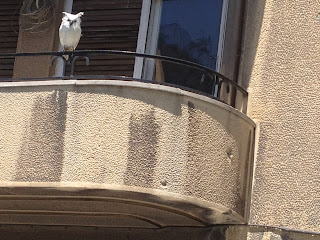 My teacher and I concluded rhythmic characters and began studying the expressive and qualitative characters.  Next lesson, we will begin chanting from the Anastasimatarion (Sunday ressurection service book).

On the way back, I stopped by To Prodopion to get a gyro and souvlaki to bring back for lunch.  After some prodding and espresso, Bekah got up from her nap, and we ate lunch. 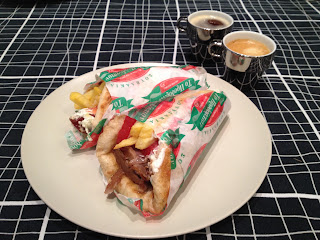 We left for the acropolis.  Of course, along the way, I had to show Bekah all the amazing churches.  We walked down "church supply row" (St. Philothei Street) to Adrianou to Dionysiou Areopagitou.  We passed the Herod Atticus Amphitheatre (where we will see an opera on Sunday!!!), then up the steep slopes to the Acropolis. 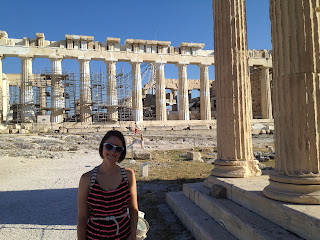 The ancient monuments are impressive in size and aesthetics.  I love the way the marble glows.  It almost appears translucent. 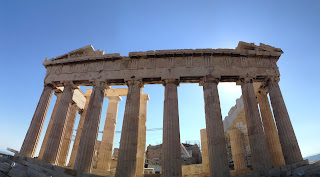 The view is incredible:

Beside the Acropolis is the Areopagus, the small rocky outcrop where St. Paul preached to the Athenian philosophers, bringing Christianity to Attica. 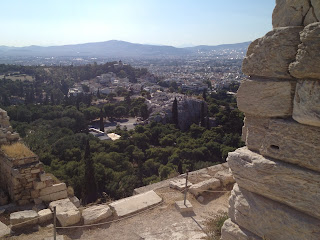 We climbed the Areopagus, pondering with awe that we are standing where the Apostle preached.  I am excited to be in this, of all places, for the Feast of Ss. Peter and Paul (well, I might be on Mount Athos then, so it's a win-win).

We walked through Plaka and Monastiraki, rested at the apartment, then ate dinner at the lovely little taverna, Filema, which is just out my back door.  Bekah had grilled octopus. 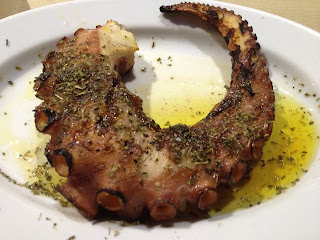