Opera in the Odeon

St. Irene follows the full typikon (at least for Sundays and liturgy). It's awesome.  Everything is chanted antiphonally, both typical psalms (103, 145) are sung in full, the beatitudes are chanted with stichera (verses), the small entrance with the gospel follows the same path around and through the nave as the great entrance, the people sit for the epistle, the deacon censes during the alleluia, the gospel is read from the pulpit which is high above the center of the nave and is ascended with a spiral stairway (we need a pulpit like that at St. Marys!). 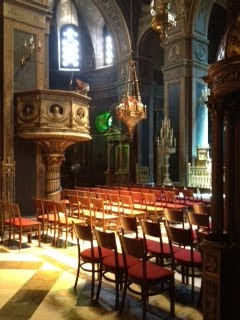 After Liturgy, I had a lengthy conversation with a cantor over coffee (OK, it was filtered, so not "coffee").  "We even still do the prayers for the catechumens...not sure how to translate it...you know in ancient times when adults were baptized in the church. It's part of the liturgy and we can't just choose parts to take out." It's a totally different paradigm in this culture, where everyone is baptized Orthodox in infancy, compared to America, where the Orthodox population is small, but people are joining in droves.  So, yes, there are parts of the world that still have catechumens, so we need their prayers from the catholic church.

Bekah and I couldn't quite decide what to do, so we went to Piraeus to go to Aegina.  Aegina is an island that is close to Athens (40 minute ferry ride) in the Sardonic Gulf.  Unfortunately, since we had plans later in the evening, we would only be there for an hour and a half.  Probably not worth 40e…especially since for a few more, we could go to Hydra or another island for a day.  We walked around Piraeus for a bit (not too much to see, at least around the port), then got back on the metro before our tickets expired. 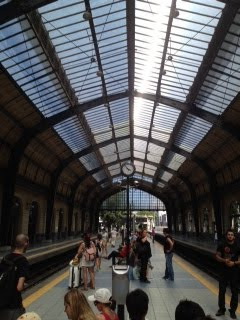 From Monastiraki, we investigated several shops around tourist trap central.  I found it amusing and ironic that a shop in the old mosque was selling liquor.  I still didn't buy a dumb t-shirt, alabaster statue, or Spartan helmet.

We ate at the Ithaki tavern, in the shadow of the Cathedral.  I had gyros; Bekah had moussaka.  One last meal before the apostle's fast. 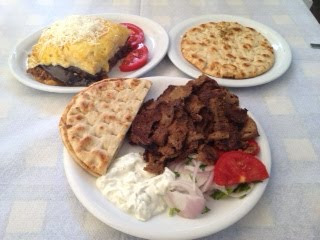 The time had finally come to head down to Plaka and the Acropolis.  We saw Verdi's Il Trovatore in the ancient Herodus Atticus Odeon (amphitheatre) on the Acropolis.  The 2,000-year-old venue was sold out to 5,000 people.  The musicians were outstanding.  The set, lighting, props, and other general effects were spectacular.  The stage and venue tied it all together…it was perfect.

The perfect acoustics enabled us to hear, not only  the singers clearly, but even the clothes rustling on the stage, and without any microphones of course.  If the ancients could design perfect acoustics 2,500+ years ago, why can't we do that today in churches and auditoriums?  It is so frustrating when I am at a concert , etc. where there are microphone problems which halt the show.  What's so frustrating is because it's so unnecessary: if the space was designed competently, no microphone would be needed.  It didn't seem to be a problem 2,500 years ago, but we can't seem to do it in our "advanced" times.  I think microphones and cars have a lot in common...we need them only because they exist.