Fotis, who owns my apartment, also runs the Athens Fish Spa. He gave me a complimentary treatment with renting the apartment. I took Bekah, as a pedicure just isn't exactly my thing. It was an intersting experience to say the least. A hundred little fish attacked our feet. The fish suck and eat the dead skin. It tickled at first, but after we gradually got used to the fish, they felt like mild vibrations as if our feet were asleep. In the end, it was an experience, and my feet do feel better. 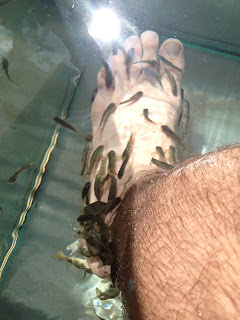 During the fish treatment, we talked with Fotis about his recommendations about what to see and do in and around the city. He recommended we go to the top of Mount Lykavittos for sunset (the highest point in Athens). Another great spot is "A is for Athens" hotel on Monastiraki Square, which offers a panoramic view of the city from its rooftop cafe. He recommended taking the tram from Syntagma to the beaches. One of his favorite spots in the town is Anafiotika, a village at the foot of the Akropolis. We knew he frequents islands and wanted his advice: Santorini for beauty, but comes with too many tourists, Mykonos for nightlife, Hydra is close to Athens and has no cars (only donkeys), Paros and Naxos have great beaches,few tourists, besides Fotis got a nice room on Naxos through booking.com for 15 Euros (less than $20) per night. He recommended Agia Anna (St. Anna) as his favorite spot on the island.
"It's already afternoon," we thought. "Today we'll decide which island, make arrangements, and pack, then we'll catch a ferry tomorrow."
We went to Plaka to church supply row to buy a few requested items for friends and family.
We continued further into Plaka to find Anafiotika. We got lost and couldn't find it, but we did find the Psarro Taverna, which had great stuffed tomatoes and cuttlefish with tomato sauce, finished with a dessert not unlike grits soaked in honey. 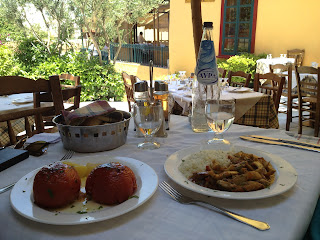 Using the taverna's wifi, we located Anafiotika (the next block over, of course). This charming 19th century village was built by carpenters from the island of Anafi, who moved to Athens to built the king's palace (which later became the parliament). They also built their dwellings on the northern slope of the Akropolis in the style of an island. It was really incredible to step out of a bustling city and into a little Greek island village, only to look up and see the Akropolis. 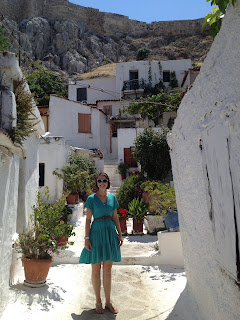 After having an "island adventure," we returned to the apartment to research our upcoming trip. Fotis recommended stopping at Paros for a day, then visiting nearby Naxos. We thought it might be too exhausting to visit both. Paros is closer, but through booking.com, we found a hotel in Agia Anna, Naxos, that offered rooms for 20 Euros with free transportation to and from the port. It had favorable reviews and photos.  Sounds good. We called the a ferry ticket booking agency, who told us that two ferries leave every day at 7:30 am and 5:30 pm. 5:30 was in an hour. We made a great spur-of-the-moment decision: "Let's leave now!"
I called the hotel in Naxos as Bekah threw clothes in a suitcase. There was no problem to pick us up at 11:00pm when the ferry arrived. With our suitcase in tow, we ran to the Monastiraki station, and jumped on a train to Pireaus, the port of Athens. We quickly bought our roundtrip tickets and found ourselves on the boat just before it departed. 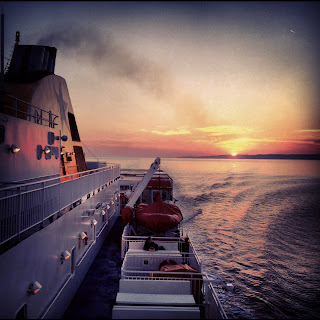 In the haste of making these decisions, my only regret was buying the return ticket.