This morning, I awoke to construction on the apartment down the hallway. Good thing the construction didn't start at 6 or 7 a.m. like it would have in America. It was more like 9 a.m.

It was so noisy so I went to Panagia Kapnikarea to say my morning prayers. Even that was noisy with the doors open to the busy street (people, no cars) and a conversation between a gentleman restoring the old frescoes and a random lady. In spite of the conversations, I must say I am impressed with how active and lively the churches are. There are constantly people stopping by the church to pray, light a candle, kiss an icon, and go on with their day. The average person walking on the street will cross himself when he passes a church... even if he looks "cool" or "rough."

Afterwards, I stopped by Άγια Ειρίνη (St. Irene) to inquire about services (in Greek of course). Tomorrow is a holy day, one of four (I think) Soul Saturdays in the year in which a memorial service is held for all who have ever died in the history of the world. I was correct, there was vespers tonight (at 6 p.m.) and Liturgy tomorrow (at 7 a.m.).

I stopped by the Cathedral to venerate Sts. Gregory and Philothei on my way to church supply row. My realization today is not only are there literally blocks upon blocks of nothing but church supply shops, but these are actual workshops that produce the goods they sell. Almost every store has a shop in back or down in the basement that produces their own handcrafted church supplies be they icons, vestments, wooden church furniture, or a multitude of metalwork such as chalices, tabernacles, lamps, or candle stands.

I stopped in a vestment store to ask about a ράσο ψαλτών (raso psalton or cantor's cassock). The shopkeeper kindly told me that she does not have or make any, so she directed me to Ambelos just down the street (I bought my current anteri (cassock) from Ambelos in Chicago). The ladies there did not speak any English, so I carried out the transaction entirely in Greek. Their garments are customized for the customer, so they measured me and the raso and altered it while I waited. "Deka lepta (ten minutes)", she promised. They offered me orange juice and I looked at a book (abundant in photos) of the Ecumenical Patriachate. 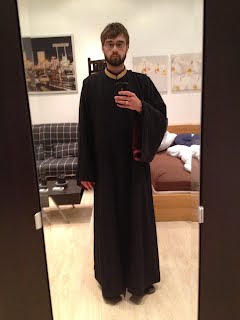 For lunch a stopped by a taverna in the shadow of the Cathedral in the Metropolis square. I ordered delicious stuffed peppers and a coffee. "Coffee," by default, means "frappe." Order "filtered" if you want what Americans call "coffee." During lunch, I began to read "Imagine," written by Jonah Lehrer, recommended by my wife, Rebekah.  The book is about the creative process. I'll write more as I read more. 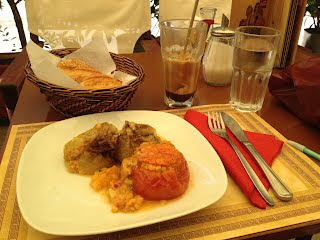 On the way back, I saw that the small church in the square where my apartment is located was open today, so I stopped in. I was amazed. This little church, that's little more than a hole-in-the-wall, outdoes most churches in America. It is old, dark, and reeks of incense. Almost all the icons are covered in a silver "riza" (επένδυση) a protective and decorative cover over the icons. The iconostasis is wrought of metal, with a large crucifix on top. The ceiling is painted flat black, which sucks whatever light comes from the door, candles, and darkened windows. I am sorry that I cannot provide photos of the churches, since a photo would outdo a thousand words. It turns out that this church is named after the Dormition of the Theotokos, just as my parish is at home. This little chapel, literally outside my door, is a home away from home. 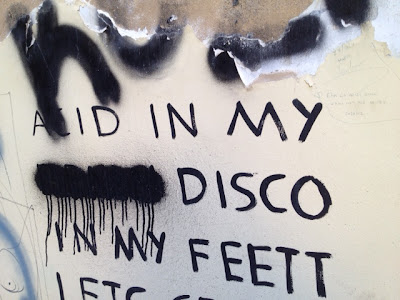 A good third of the graffiti in Athens is random English words that make no sense... I guess being a barbaric (i.e. Germanic) language, it can stand as vulgar on its own merit. There is graffiti everywhere... sadly, churches are not exempt. This example is on the apse of the Church of the Dormition in the square that my apartment opens on.


Next on my list was grocery shopping. The tavernas are great, but I would soon run out of money if I ate out all the time, so I am going to cook at home, too. For advice, I stopped by the Fish Spa, which is Fotis' (my host) shop. Christine, a Greek-Asian girl who runs the Fish Spa when Fotis is not there (his primary job is a civil engineer) was there today. With a squeamish look, she told me to avoid open-air markets, but rather recommended "Bazaar," an American style super market a few blocks from my apartment.

Between my limited Greek (which is improving!) and the photos on the package, I could identify most items. I still got a few mystery items because it's Greek food, so it has to be good. Besides, I am adventurous.


There were a few differences between Aldi in Goshen and Bazaar in Athens. First of all, there was only one way in or out, and that is through the checkout lane, which is just as narrow as our checkout lanes in the US. One can't enter if someone else is checking out. People squeezed, pushed, or waited. All the eggs were brown in half-dozen, clear plastic cartons. The strangest thing about the eggs: all were out on shelves and not refrigerated.


Half the cheese section was Feta. The deli section had two items: olives and feta cheese. The seafood was abundant... both fresh and frozen. The freezer section was interesting. There was only one kind of frozen pizza: "Texas" style. Whatever that means, I'm not sure, because it looked like regular pepperoni pizza to me. From the freezer, I bought spanokopita (phyllo [flaky Greek pastry]) with spitika (phyllo with cheese), and other Greek cuisine (I got some that I could identify, and some that I can't... I'm sure it'll be good). There were several brands of canned dolmata (stuffed grape leaves)... of course I got a big can to snack on.


Cleaning supplies were in the basement. Deodorant was in a locked case... the only such locked case in the store.

At Bazaar, for the first time, I ran into the infamously rude Greeks. They ignored me and/or cut in front of me in line. Still, I wasn't impressed that these people were any more rude than your average American in a big city.  I hope this is the worst of it. 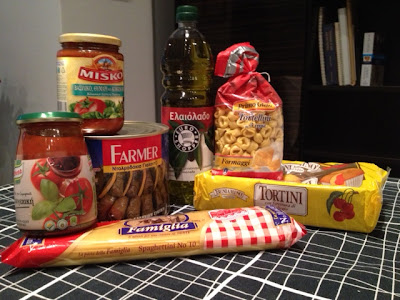 During checkout, I remembered I do not have a car and will have to carry this all back to my apartment. It got really heavy after 5 blocks. To top it off, I hit the wrong floor button on the elevator. It's easy to get confused: "0" is street, "orofos" is 1st floor (they call it a half floor), then my floor is called 1st floor, but would actually be 3rd. Remembering that I am on the 3rd floor, but the 1st doesn't count (but forgetting about orofos) which is what I pushed, which took me to the wrong floor, and a lady walked in and assumed I was going up still... I spouted out "nai" thinking "no" then remembered "ohi" but by then it was too late. For future reference: "nai" is "yes," "ohi" means "no," and "nai, nai, nai, nai, nai, nai, nai, nai, nai, nai" (as fast as possible) is how you carry on a conversation in Greek.


The elevators are interesting. Every building has one and they are small. They look just like any other door (except the small button on the wall) and do not open automatically. There is room for maybe two people... three if you squeeze. Some elevators have an inside door, and in some you have to be careful to not touch the exposed wall moving past. The elevator shaft to my apartment is a caged-in area circumscribed by the stairs (speaking of, I have yet to see stairs in Greece that are not marble).


By the time I put away the groceries, it was time for vespers at Άγια Ειρίνη. Like St. Mary's, there were maybe a dozen people in the congregation for vespers. There were about six cantors, although with one exception, they only sang individually, and only from the right psaltierion not antiphonally, even though they are set up for it (I'll find out at the Pentecost vigil tomorrow and liturgy on Pentecost Sunday). The chanting was amazing. Words cannot describe it (but if I had to, I would say "beautiful, fluid, organic, and intentional"). There was a memorial at the end (tomorrow is a "Soul Saturday") and I was given kolyva to eat. Kolyva is a traditional food made by Orthodox for memorials, and it consists of boiled wheat ("unless a grain of wheat dies and falls to the earth, it bears no fruit"), sugar, fruit, and nuts. I exited the church to eat my kolyva.


In Greece, the homeless congregate around the churches to ask for alms (imagine the Jerusalem temple in the Bible). Almsgiving here is not some abstract charitable deed, like it is in America, where someone gives to his church, who then gives it to some organization that provides benefits to the needy. In Greece, almsgiving is a concrete reality every time a person enters a church. Christ himself is waiting on the steps of the Church, needing clothes, food, and shelter.


A homeless man, who may or may not have been under the influence, began talking to me. We carried on a conversation, mixing English and Greek. Evidently, he lived in Chicago for 10years.  He warned me to not go into the next street over after 9 p.m. "There will not be one person," he warned.  "You look right and left, no one. Bad people are there. Albanians and Turks. Not Americans, Germans, English; they are good. Five guys will come with knives and take everything, even your pants and shirt." I heeded his warning and stayed in tonight, listening to Greek music and eating the dolmata, spanakopita, spitika, and kalamata olives I bought from the store.

PS: To ease any fears, my street is busy and well traveled, and there are always police in the street below my window. The square behind the apartment is lit and has several bars and tavernas.  Fotis says this is a safe place and he used to live here.