The Best View in the City

Fotis recommended the A for Athens hotel as having the best view of the city.  I think he was right. 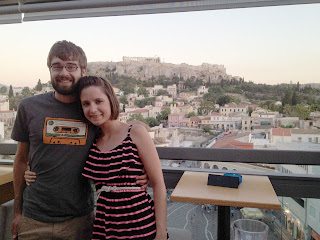 Bekah and I entered the hotel just off of Monastiraki Square.  Unfortunately, there was a line for the elevator (max. capacity 3), so we took the stairs since it would be awhile.  The cafe/bar/restaurant is on the 6th floor (Americans, read 7th).  We opened the stairway door to the most happening bar in Athens: loud techno music and not an empty seat.

Of course, we still got there ahead of the people waiting in line.  I hope they made a reservation.  We were lucky to squeeze in.  Fortunately, the 7 flights of not-air conditioned stairs was rewarded with what is truly the best view of the city.  A picture is worth a thousand words, so I can't begin to describe it: 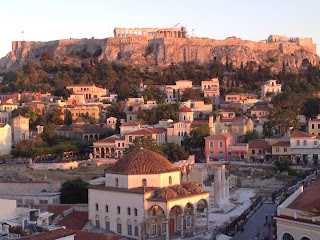 Of course the view comes with a price (besides the climb).  What just bought us two nights in a hotel with ocean views earlier this week, now bought us two drinks and some munchies.  Of course they were delicious, but it wasn't Kelly Jae's; we paid for the view.
Bekah ordered stuffed mushrooms and I ordered a vegetable kebab. 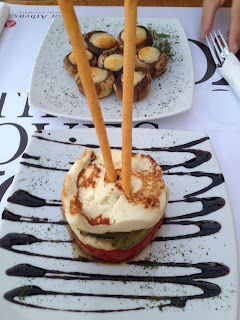 The music changed to a decidely Greek folk techno: samples of folk instruments playing traditionaal scales, set to a dance beat.  For drinks, Bekah ordered the "A for Athens Sour," which, among other things had rosewater, topped with egg whites beaten stiff with potpourri roses.  I ordered the "Corpse Reviver" which had several kinds of citrus liquors and absinthe. 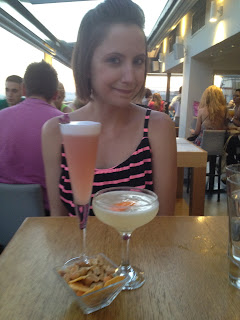 Bekah and I stayed late into the night, sipping our drinks and enjoying the best view of the city. 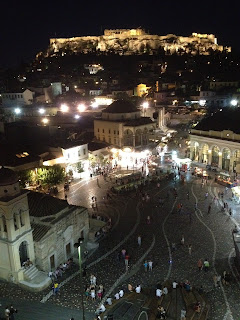