On the Campaign Trail

My wife and I returned from Naxos yesterday, Thursday 14 June. Soon after we returned, I went to a lesson with Arvanitis while Bekah unpacked and relaxed.  I learned more about ornaments and embellishments for the melody and the meaning of particular qualitative characters.  Up to this point, we have only worked on lessons; today we chanted the first hymn.

Now, with days until the election, the campaigns are in full swing, especially in and around Panepistimiou, which seems to be a hub of political activity. Elections are coming up on Monday, but up until this week, I have not noticed much of any campaigning (I assume because of lack of money).  My route to and from Arvanitis' apartment goes through Panepistimiou, the university, so I have seen some interesting things.  All the streets are lined with posters for the various parties. 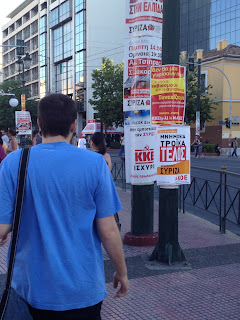 In Panepistimiou, the parties have set up booths and tents to distribute flyers and exclaim their views with megaphone.  Now, when I say parties, I mean many parties.  This is not America, in which there are only two parties that share essentially identical views and policies (big government and big spending).  In Greece, political influence is divided among many parties with vastly different ideas, and most are realistically expecting to get some seats in parliament.  Alas, I don't know enough Greek politcal jargon to read what each party stands for in the material that was handed to me as I walked through Panepistimiou. 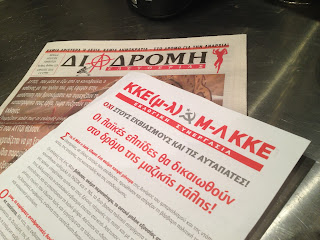 Fortunately, I can get some idea of their views from their political symbols which transcend the language barrier.

KKE and SYRIZA are both leftist parties, displaying the hammer and sickle (at least they aren't hiding what they stand for): 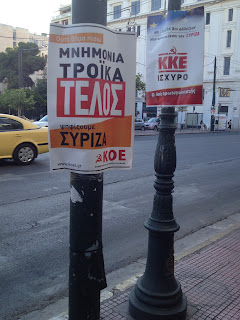 These posters are everywhere.  By the way "ΙΣΧΥΡΟ" means "strength" or "might"

The Anarchist Party (I think it's a politcal party, but I may be wrong...if so, all the Anarchist "A" graffiti around town is actually part of the campaign).  The Anarchists were blaring punk  music and handing out literature (see above): 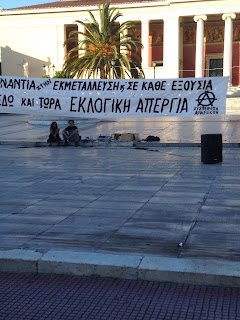 The Golden Dawn, with the Greek Key (which opponents, who label them neo-Nazis, link to the swastika without too much imagination in the poster below): 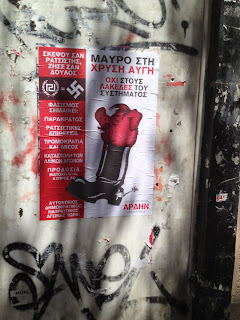 The Democratic Left (the name is self explanatory): 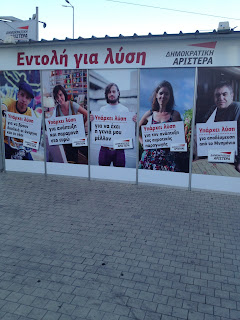 Koinonia (means "Communion," but I'm not sure what they stand for, but they use a Byzantine font, have a iconographically stylized ship for a symbol, and their website has a photo of a Bishop...can't be all bad): 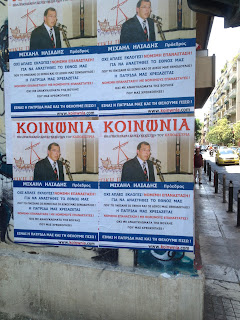 I'm sure there are more parties, but this is hopefully a fair cross section of the contenders.  I'm not sure which party this belongs to (I can guess), but it is worth mentioning: 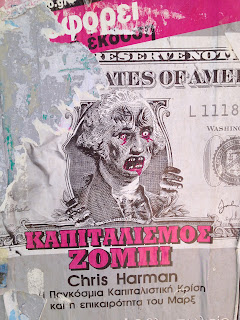 Another party, the New Democrats (I think they are politically right, but not sure) held an extensively advertized rally scheduled for Friday at 8.  Today, on our way back to the apartment, Bekah and I consciously avoided Syntagma Square, in which the New Democrats, because, well, it's 8:15 and Syntagma is between Kolonaki and my apartment.  Well, try as we may, Syntagma couldn't be avoided.  But there was nothing to fear, just a politcal convention, not really any different than what we see at poltical conventions in America: a sea of patriots in white and blue waving Greek flags, cheering for the rock band and candidates giving inspirational speeches.  With traffic blocked, it was easy to get around.  Unfortunately, my iphone (i.e. camera) battery was dead, so I can't provide photos.

Monday should be interesting with the elections...I guess we'll see what happens.

Note: forgive the poor photo quality.  I tried to be as discreet and "Greek" (i.e. not an American tourist) as possible, so I tried to feign texting the whole way through Panepistimiou.