Yesterday, I did not go anywhere or do anything exciting. I relaxed after running around for much of the week. I practiced and cleaned up the apartment for Adrian's arrival.
Today, Sunday 24 June, is a feast day, the Nativity of St. John the Baptist It is about 6 months to Christmas, and he was 6 months older (so to speak, since Christ existed before time) than Christ. Being a feast, vespers last night had a little more pomp and ceremony. After the singing of "O gladsome light," which signals the beginning of the new day, was a particularly beautiful moment. The choirs met in the middle and began a slow procession to the back of the church while singing hymns specific for the feast. They were followed by the acolytes with candles and the deacon with the censer. Last came the priest with the icon of the feast, which he reverently placed on a stand after all had assembled. 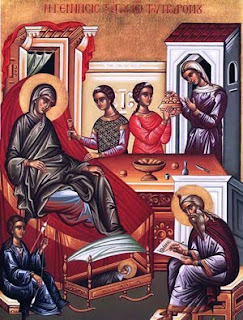 The extraordinary part of the service continued from the back, complete with several intercessions and "Lord have mercy" sung 12 times in a distinctive melody after each petition. The "ordinary" service of vespers resumed as the choirs processed back to the front, followed by the clergy.
In the evening after vespers, I talked with a couple of cantors from St. Irene's. The three of us happened (probably not a coincidence) to meet at the metropolis, venerating the relics of St. Philothei and St. Gregory. We sat on the marble steps of the metropolis (which were still quite warm from bearing the sun's heat all day) and talked about life.
It was so encouraging to talk to these men my age who have suffered much but have such strong faith. One of the cantors was telling me how the saints help him, especially St. Nicholas, a new-martyr from his city, and St. Ephraim of Nea Makri (see Thursday's post). He was one of the few Greeks I have met who were encouraged (as opposed to perplexed) that I grew up Protestant and became Orthodox in adulthood. "Yes! Like St. Seraphim! I have his icon." 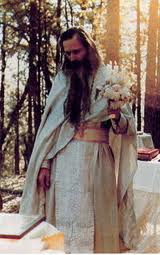 Father Seraphim Rose grew up Methodist in California, turned to eastern religions, and eventually found Truth in Orthodoxy. He became a priest and a monk, founded a monastery and wrote several books in English, as well as some in Russian to strengthen the persecuted Church during soviet times. He died in 1982, and is popularly venerated, although not officially canonized yet.
Today during liturgy, I made careful notes of exactly how the Liturgy can be sung antiphonally by two choirs. Watch out, St. Mary's: this will happen this fall! We can do it!
After liturgy, I got coffee with a cantor I met last night, as well as a woman he met outside the church. His English is quite conversational, but she speaks very little. The three of us had a nice conversation. She just visited St. Nektarios on Aegina. She said that in the hills above the monastery, there are 365 chapels, each for a saint for every day of the year. The conversation was mostly in Greek. While I didn't understand every word, I did get the main idea. She bought both of us a handheld/hand-powered sewing machine from a street peddler. 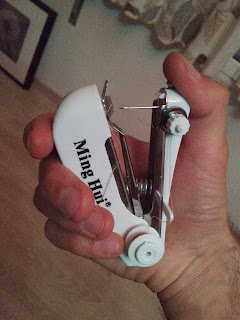 I took the bus to the airport to meet Adrian. I am very glad he is with me...it is good to have a friend to share in the experiences. We dropped his luggage off in the apartment, then walked around Plaka. We were hoping that St. Demetrios was having vespers, but they weren't. We sat in a taverna in the shadow of the acropolis over a carafe of local red wine, then walked through Anafiotika. He really enjoyed walking down Adrianou street, naturally. Of course we couldn't miss the opportunity: 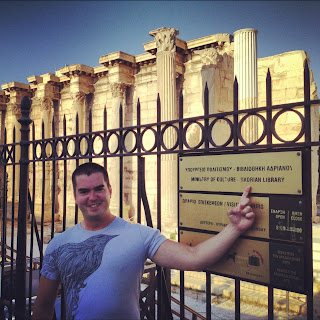 All the churches were closed (as were most of the stores). We will visit the churches tomorrow. We ate dinner at a taverna beside the Metropolis. Panagiotis called and showed up a few minutes later with the train tickets for Thessaloniki. But then, he didn't want us to take them until he called the Geronda (elder) on Mt. Athos. The tentative plan is to leave tomorrow on an overnight train to Thessaloniki, then spend Tuesday and Wednesday on the Holy Mountain. May God grant us mercy and grace to undertake this awesome pilgrimage!
Let the adventure begin/continue!