Today is Pentecost Sunday, fifty days after Pascha, when the Church commemorates the coming of the Holy Spirit. Today was very encouraging.  Άγια Ειρίνη was filled (I couldn't see an empty seat), and most communed. 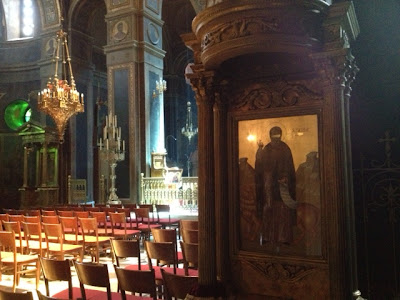 Nave of Άγια Ειρίνη, icon of St. Germanos.
The psaltierion was also crowded.  Today I met my teacher, Ioannis Arvanitis.  We scheduled a tentative lesson for tomorrow, sometime in the afternoon.  If he can't make it to liturgy tomorrow, then he told me to call him, so that means I have to get this phone situation figured out (which needs its own post).
I also met Lycourgos Angelopoulos (protopsaltis, or right choir director...just look up the Greek Byzantine Choir...he's the director, and a lot of the choir chants at Άγια Ειρίνη).  He greeted me quite warmly was was excited that I was studying chant.  This is quite an honor; I've been listening to the Greek Byzantine Choir since before I was Orthodox.
Yesterday after vespers, Yannis Tsiotsiopoulos (the lampadarios, or left choir director) invited me to chant in his left choir.  "No pressure.  Do what you can.  Words, no words, ison, whatever you can."
I was told to "just wear any raso that fits." Unfortunately, the one I took belonged to someone, so I had to switch when he arrived and figured what had happened. 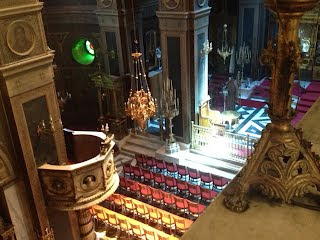 The pulpit and left choir, from the balcony.  The choir is in the very front, behind the large column and fence.
Today, I chanted in the left choir with Taso Stellas (a professional opera tenor, whose English is so good that he has an English accent) and Nikos Georgantonis (a Chicago-native who lives in Athens, and studying theology, I believe).  Both were very warm and welcoming.  I mostly just took in the experience, but I also held the ison (drone), and sang with them in Greek on a few slow hymns.
Hearing of my coming (I'm flattered, really.  This is more than I deserve...these chanters are infintely better than I am), they printed a few hymns in English from St. Anthony's Monastery.  Today, the left choir sang "Blessed be the Name of the Lord," in English, for the first time.  On the feast of Pentecost, when the Holy Spirit came and filled the apostles, giving them new languages to spread the Gospel to ends of the earth, the barbaric English tongue was introduced to Άγια Ειρίνη, in the city where, 2,000 years ago, the Apostle Paul brought the Gospel to the Gentiles.  "We are an international church here," said Taso.  "Russian icons, Arabs come here, and now English." 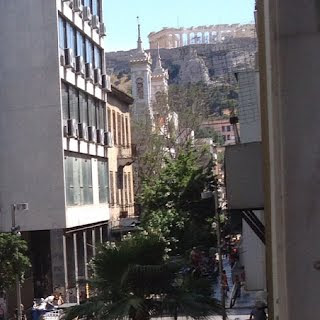 'Αγια Ειρίνη and the acropolis
Nikos and Arvanitis invited me for coffee upstairs. The balcony serves as a fellowship hall/coffee shop after liturgy.
In Greece, "coffee" means a strong drink, a sludge of coffee grounds.  If you want what Americans drink, ask for "filtered."
Nikos and Arvanitis soon had to leave, so I sipped coffee (not filtered) with Giorgis, another cantor, across the table from Angelopoulos.  Also across the table was a 94-year-old cantor from Constantinople named Konstantinos (I missed his last name).  He sang quite a bit today, and is still incredible.
Giorgis was excited to practice his English, and I was eager to practice Greek, so we had a good conversation.  He is a recent college graduate and is looking for a job.  He asked if I cheered for the Pacers. He was delightedly surprised to hear that our capital is Greek (at least in name: Indianapolis).  He also asked if there are many Orthodox.  I told him there are very few, and you usually have to go to a big city, but my town is unique in that it has three.
Orthros began at 6:30am...we didn't drink coffee until noon (did I mention that the kneeling vespers followed liturgy?).  I am ready for a nap.

Orthros was chanted from the right choir until Angelopoulos arrived, then we split into the left choir and chanted the service antiphonally.
Both canons for the feast were sung in full.
During the Katavasia, both choirs descended to the center of the church and chanted together (katavasia means "descent").
The liturgy was also sung antiphonally.  I had never realized how it could be done.  For the Great Litany, the "Kyrie Eleisons" (Lord Have Mercies) were grouped together.  Three/four (I didn't count) from the right, then three/four from the left, etc.
The antiphons, naturally.  The left choir began the second antiphon.
The congregation sang along (reservedly, of course) with the Apolytikion of the feast: "Blessed art Thou, O Christ our God, Who hast revealed the fishermen as most wise, having sent upon them the Holy Spirit, and through them Thou hast fished the universe, O Lover of mankind, glory to Thee."
The trisagion, prokeimena, and Alleluia were antiphonally chanted, first by the right, then left. 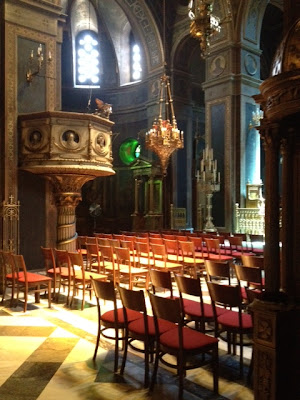 The deacon read the gospel from the pulpit high above the center of the nave.

The initial "Glory to Thee" was very simple, soft, and quick.  The "Glory" after the Gospel was much more elaborate.
The Cherubic hymn was sung entirely by the right choir.
The right choir also took the conclusion ("That we may recieve the King of all..."), but Taso explained that the left choir should sing the ending, but we didn't have the sheet music.
The anaphora responses were sung antiphonally, first the right, then the left.
The left choir took the communion hymn (although the whole right choir joined us, with the exception of Angelopoulos, Arvanitis, and Konstantinos [see below]).  The communion hymn was in papadic first mode, during the communion of the clergy, briefly paused when the priest and deacons exited the holy doors and invite the people to commune, then resumed for the duration of the communion of the people.
During communion, the people came behind the choirs (men stand on the right and women on the left, so they have different communion lines as well).  The deacon communed the women while the priest, the men.
After the liturgy was kneeling vespers.  I admit, I dozed off while prostrate during the kneeling prayers, but came to with the deacon's loud exclamation to "stand upright."
End liturgical notes. 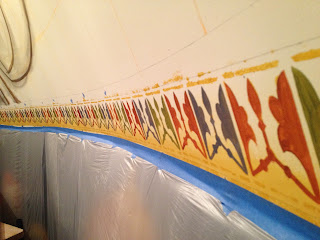